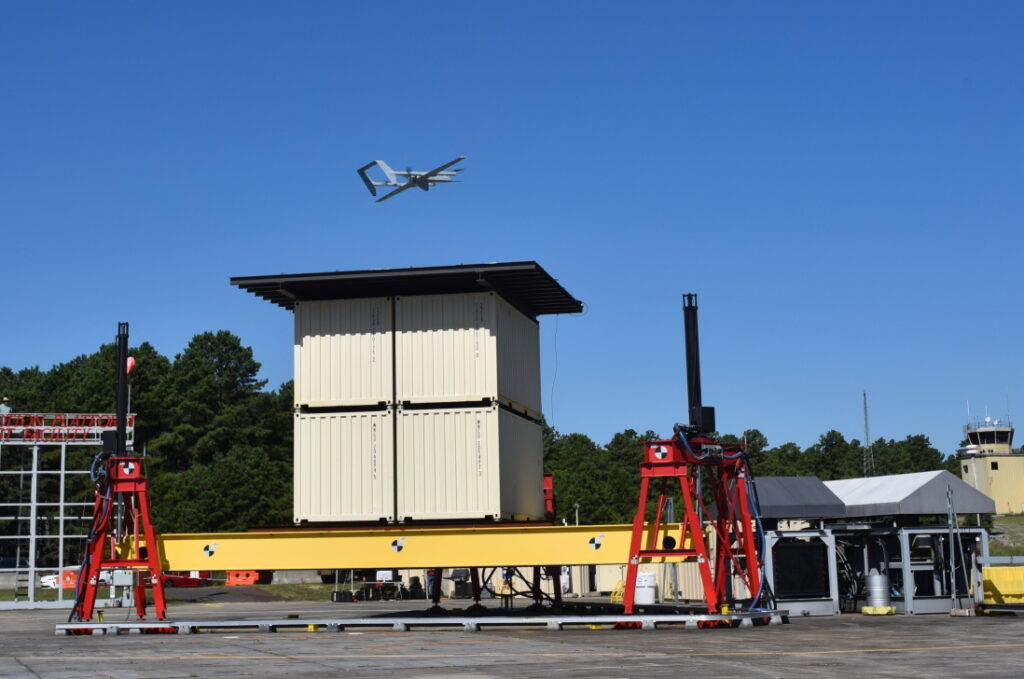 A new testing platform for maritime UAVs (unmanned aerial vehicles) has been completed by team members from Naval Air Warfare Center Aircraft Division Lakehurst (NAWCAD LKE) and is now fully operational. The Ship Motion Platform (SMP) offers the Navy and other interested parties a ship motion environment without the need for dedicated at-sea periods, thereby reducing costs while providing an opportunity to also reduce schedule and technical risks to programs. While the SMP cannot replicate every aspect of the ship-board launch and recovery environment, it can help UAV teams in technology maturation and risk reduction efforts.

“The ability to provide innovative tools like the Ship Motion Platform to the Navy and its partners is at the very heart of our mission here at NAWCAD Lakehurst,” said NAWCAD LKE Executive Director Kathleen P. Donnelly. “These tests show we are ready and able to do our part in this greater effort.”

The control system allows the LKE team to simulate the movement of both aircraft carriers and guided-missile destroyers in waves up to sea state 4 with wave heights between 4 to 8 feet. The SMP can replicate the pitch, roll and heave of a ship at sea and hold a static tilt as part of the testing. In addition, the SMP is rated for a payload of 100,000 pounds, although heavier loads can affect how much movement the system can handle.

The SMP, acquired in 2017 from U.S. Army Aberdeen Proving Ground, Maryland, aids in ensuring platforms that come to test encounter the sea states and ship motions necessary to achieve certain test points. For the SMP, achieving sea state 4 motion isn’t a matter of wind and weather, as it is at sea, said NAWCAD LKE test engineer Rob Pellegrino.

Recent UAV tests on the SMP used four CONEX boxes attached to the steel structure to replicate the deck of a ship and provide extra safety for the aircraft.

“UAVs are really going to be at the forefront of Naval technology moving forward. And what the platform does for anybody, whether it’s support equipment, an aircraft or even human interface testing, is it provides a repeatable solution or environment that you otherwise can’t get at sea,” Pellegrino said.

The SMP allows for safer testing at NAWCAD LKE’s land-based site in Lakehurst, New Jersey, rather than testing at sea.

“The argument is whether a captain wants to sail his or her ship into really rough waters to support a test. You still don’t know what you’re going to get in the variability that is the actual open ocean. So, the idea that I can come and bring you a specific sea state and then repeat that sea state over and over again is something that you’ve never had before,” Pellegrino said.

NAWCAD LKE Officer in Charge Cmdr. Walter A. Reynolds said he was thrilled to see the years of work by Pellegrino and his team pay off in a way that can benefit the fleet for years to come.

“The use of the Ship Motion Platform is just the latest example of the work done here at NAWCAD Lakehurst, aimed at offering capabilities that contribute to the success of our supported programs,” Reynolds said. “Seeing the successful testing of the UAVs is a testament to the work done by Rob and his team to take a concept and make it a reality. I have no doubt that, if utilized, test events here will positively impact programs in areas of schedule and cost savings while allowing them to test, mature technology and then test again at a pace we need to make that the norm.”

After five years of development, Pellegrino said he believes the recent tests are just the beginning as word spreads about its benefits.

“The Ship Motion Platform has a small, close-knit team that has really pushed themselves to continually improve the site and its capabilities,” Pellegrino said. “The site’s success is a testament to the team’s work ethic while their ability to accommodate ever-evolving test objectives is what will spotlight the platform and its capability.”

As more is learned about the SMP and its capabilities, the team is excited to welcome new partners to the facility and see what other benefits the system can have for both the Navy and the companies that help it fulfill its mission-critical objectives.

“The point of bringing an aircraft in is I want them to test, and I realize they may not be ready for shipboard testing. So, the ability to provide them with a safe and controlled environment is a capability we’ve never had before. This lets them develop and learn without risk to operational Navy equipment,” Pellegrino said.