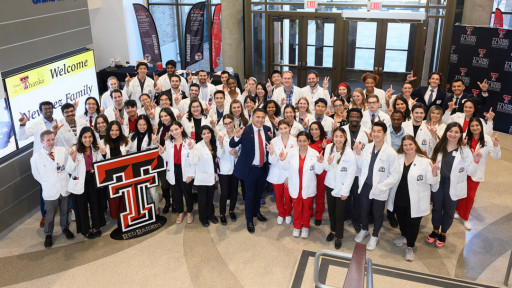 In the early 1990s, Nevarez, a first-generation college student, worked at a grocery store while studying toward his Bachelor of Science in petroleum engineering at Texas Tech University. Working twice as much as others wasn't new to him.

When the family's tortilleria business in his hometown of Ciudad Juárez wasn't making as much money, Nevarez, still in junior high school, decided to help by working nights in a maquiladora factory.

At 15, he came to the U.S. instilled with his family's strong work ethic. Encouraged by his godmother and a motivation to succeed, he enrolled at Texas Tech University.

Years later, and after touring the TTUHSC El Paso campus this past spring, he was impressed by the state-of-the-art facilities but floored by students and their work ethic.

"I talked to first-generation students who told me they were struggling, counting on loans and different programs," Nevarez said. "I really saw myself in them: They were working hard, they're Hispanic kids, and they're trying to get through medical school like when I was trying to get through my petroleum engineering program."

Nevarez decided then he wanted to do something to help first-generation students from the Borderplex, a region encompassing Texas, New Mexico and Mexico. During a special luncheon on the TTUHSC El Paso campus, he announced two major gifts in support of student scholarships.

Nevarez gifted $50,000 to the Hunt School of Nursing for a scholarship fund named in honor of his late mother, Guadalupe "Lupe" Sanchez De Nevarez. Recipients of this scholarship will be first-generation students from the Borderplex region.

Inspired by the afternoon's events and after hearing about the challenges students faced, Nevarez contributed an additional $25,000 to the Hunt School of Nursing, remembering his mother who passed away from complications due to diabetes and who continues to be an inspiration for the Nevarez family.

The gift to first-generation students at TTUHSC El Paso will have a resounding impact, changing their life trajectories. It also will help reduce health inequities locally, ensuring students meet their goals, graduate on time and enter the workforce where they're needed more than ever.

In addition, the U.S. Census Bureau predicts Hispanics will account for 25% of the U.S. population in 10 years. However, less than 6% of physicians in the U.S. identify as Hispanic. To fill the gap, TTUHSC El Paso is educating future bilingual, Hispanic health care providers, thanks to required medical Spanish courses for medical and dental students. In 2021-2022, 57% of the university's graduates, including M.D. recipients, identified as Hispanic.

Nevarez's gift also carries out a legacy of kindness he attributes to his mother.

"This is my way to honor my mother because she was a caring person who thought about everybody else," Nevarez said. "She always looked out for other people, and that's what nurses do. They have that giving spirit."

Nevarez lived from age 5 to 15 in Ciudad Juárez's Pancho Villa Colonia, one of the poorest areas of the city.

"We were fortunate we had enough to eat," Nevarez said. "We lived in a two-bedroom house and at one point had six people in the house. You don't realize you're poor at that age because you're surrounded by a close, loving family."

Nevarez has dedicated over 25 years working in the oil and gas business, currently serving as senior vice president of Scout Energy Partners. He serves on the Texas Tech Foundation Board of Directors, the Texas Tech University Petroleum Industry Advisory Executive Board and the Texas Tech College of Engineering Dean's Council.

Support from the local community is critical in keeping talented students from the Borderplex close to home as they receive their education. In the past 10 years, the region's donors have assisted students with financial challenges, relieving the burden of taking on multiple jobs outside of school to pay bills and afford necessities.

In 2021-2022, 44% of students attending TTUHSC El Paso schools received scholarships totaling $2,174,150. For the first time in the Hunt School of Nursing's 10-year history, gifts from donors have made it possible for the university to award three nursing students with full tuition for unmet financial need.

El Pasoan Alexia Campos knows how helpful scholarships can be. Campos is enrolled in the Hunt School of Nursing's Accelerated B.S.N. program and works at a movie theater to make ends meet. A scholarship from community leaders Bob and Jane Snow has helped lessen financial burdens.

Campos always knew her health care career would begin at the Hunt School of Nursing. But her tenacity didn't stop there. She enlisted in the U.S. Navy with goals of serving the country as a nurse and an officer.

"In my heart, I know that becoming a nurse is my ultimate dream," Campos said. "I always felt a great calling for helping others. That drive has never wavered and being able to make a difference in someone's life is possible thanks to community supporters who believe in students like me."

About the Hunt School of Nursing

The Hunt School of Nursing has partnerships with every hospital in the El Paso community, which includes both clinical rotation opportunities and job placements post-graduation, helping to fill the critical need for nurses. The school's curriculum also prepares students for leadership positions in hospitals and clinics.

About the Foster School of Medicine

Since opening in 2009, nearly 800 graduates of the Foster School of Medicine have become or are on their way to becoming practicing physicians. The school's faculty trains students in culturally competent care with the goal of keeping future physicians in West Texas to treat patients in metropolitan and rural areas. The school's graduates have helped reduce local, regional and state-wide physician shortages.

TTUHSC El Paso is the only health sciences center on the U.S.-Mexico border and serves 108 counties in West Texas that have been historically underserved. It's designated as a Title V Hispanic-Serving Institution, preparing the next generation of health care leaders, 48% of whom identify as Hispanic and are often first-generation college students.