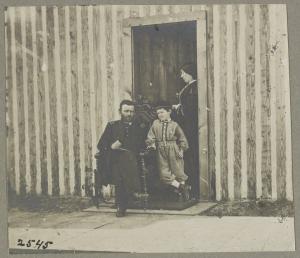 General Grant, his wife Julia and their son Jesse, courtesy of the Library of Congress. The photo was taken at City Point (present day Hopewell), Virginia in 1864. 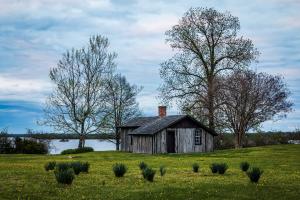 General Grant’s cabin that overlooks where the James River and Appomattox River meet.

Commemoration of the 200th birthday of Ulysses S. Grant will take place at 11 am Saturday, April 30, at Appomattox Plantation in Hopewell, Virginia.

HOPEWELL, VA, USA, April 22, 2022 /EINPresswire.com/ — Commemoration of the 200th birthday of Ulysses S. Grant, this nation’s 18th President, will take place on Saturday, April 30. The free program will begin at 11:00 am on the east lawn of Appomattox Plantation, General Grant’s Headquarters Unit, located at 1001 Pecan Avenue in Hopewell, Virginia.

The National Park Service, in partnership with the Sons of Union Veterans and the Military Order of the Loyal Legion of the United States (MOLLUS), will host a two-hour program featuring guest speakers who will talk about the life of Grant.

During the Siege of Petersburg, Grant made his headquarters 10 miles east of Petersburg at City Point, Virginia. From City Point, he would oversee all major military movements of the Union army during the final campaigns of the Civil War. He would also host several politicians from Washington, D.C. including President Abraham Lincoln. Among his most welcome visitors were his wife Julia and their son Jesse.

General Grant’s Headquarters Unit of Petersburg National Battlefield at City Point is where Ulysses S. Grant made his headquarters during the 292-day siege of Petersburg. Signage focuses on the area’s importance to the Union army as one of the largest supply bases in the nation, as well as the lives of civilians, free and enslaved, who lived and worked at Appomattox Plantation prior to the Civil War. The visitor contact station is open seasonally when staffing permits. For more information, please contact Petersburg National Battlefield at (804) 732-3531 ext. 200.

Hopewell is a quaint city of 23,000 about 20 miles south or Virginia’s capital at Richmond. Located at the confluence of the James and Appomattox Rivers, Hopewell’s historic section of City Point was one of North America’s oldest English-speaking communities. In the 18th century, Hopewell became a significant port city and in World War I it became a boomtown with the production of guncotton in the local DuPont plant. During the war, the city’s population rose from 200 residents to more than 30,000. The DuPont plant was closed after the war and the city’s population fell. In 1915 a fire destroyed 300 buildings in Hopewell, but the city quickly rebuilt. Other manufacturing plants moved into Hopewell, including Evonik (formerly Goldschmidt Chemical) In the early 1970s. The city has been investing in environmental controls and is now in the middle of a renaissance. There are new businesses, new restaurants and new and exciting projects. The Hopewell-Prince George Visitor Center staff is available to help plan your trip to the area. The Visitor Center is located at 4100 Oaklawn Blvd., Hopewell, Virginia, at Exit 9 on I-295.