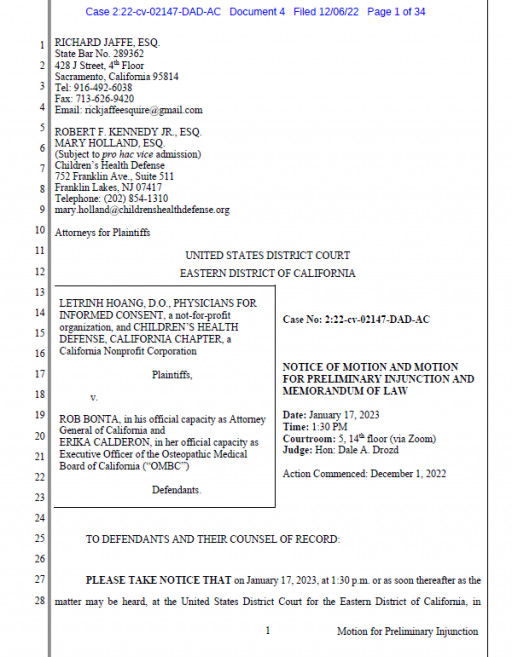 Physicians for Informed Consent (PIC), an educational nonprofit organization focused on science and statistics, has filed a First Amendment free speech lawsuit (2:22-cv-02147) in the United States District Court for the Eastern District of California, and request for preliminary injunction, against the State of California and Osteopathic Medical Board of California in order to protect the free speech of all physicians in California.

The Plaintiffs are PIC and one of its founding members, physician LeTrinh Hoang, D.O., together with Children's Health Defense, California Chapter. The legal team managing the case are Rick Jaffe, Robert F. Kennedy Jr., and Mary Holland.

The lawsuit argues that the State has weaponized the vague phrase "misinformation," thereby unconstitutionally targeting physicians who publicly disagree with the government's public health edicts on COVID-19.

Expert cardiologist and PIC member Sanjay Verma, M.D., has been tracking and cataloging CDC errors in real time. For the case, he has provided what he calls "a detailed declaration exposing the government's scientific errors and the constitutional dangers of censoring dissent":

"To demonstrate these points of vagueness and the general unsuitability of using 'contemporary scientific consensus' as a disciplinary criterion, I have prepared a detailed overview of public health response to the pandemic broken down into categories such as Masks and Vaccines (transmission, safety, efficacy of natural immunity). I have also included evidence of what [I testify] would be considered misinformation promulgated by the CDC as well as its withholding of information which led to the then 'contemporary scientific consensus' eventually being proven wrong."

PIC President Shira Miller, M.D., was active in opposing AB 2098 while it was navigating the California legislative process, and has led the effort to bring the instant lawsuit. Opposing the bill, she wrote, "Public health is not achieved, and scientific knowledge does not progress, by censoring dissenting physicians and surgeons or anyone else. AB 2098 is anti-doctor, anti-public health, anti-science, and anti-free speech."

The scheduled hearing on PIC's motion for preliminary injunction is Jan. 17, 2023. PIC has requested the District Court issue a preliminary injunction that "AB 2098 is unconstitutional on its face." The Complaint also requests the Court "issue a declaratory judgement that PIC and CHD patient members have a privacy right in their prescriptions for any off-label FDA approved medication" such as ivermectin and hydroxychloroquine.

Physicians for Informed Consent is a 501(c)(3) tax-exempt nonprofit educational organization supported only by the generous contributions of our members and supporters. Click here to make a contribution.