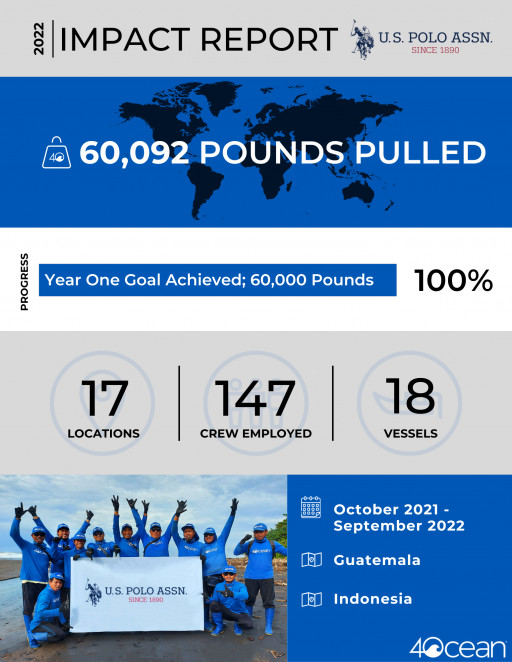 4ocean, a purpose-driven B Corp dedicated to ending the ocean plastic crisis, and U.S. Polo Assn., the official brand of the United States Polo Association (USPA), are celebrating a milestone in their partnership on International Sustainability Day 2022. Together, the two entities have removed 60,000 pounds of trash from the world's oceans through 4ocean's Certified Cleanup Partnership Program.

4ocean and U.S. Polo Assn. have been working together towards ocean-positive sustainability since October 2021 and set a goal to remove a total of 60,000 pounds of plastic from the oceans, rivers, and coastlines around the world. With the help of 147 crew members and 18 ocean vessels, most of the 60,000 pounds of waste were pulled in Indonesia and Guatemala across 17 locations. The amount of trash removed through the partnership is equivalent to the weight of approximately 60 polo ponies!

This ocean-positive project is a component of U.S. Polo Assn.'s overarching sustainability initiative, USPA Life, which works towards reducing the environmental impact of our business for future generations. USPA Life offers a global and growing selection of U.S. Polo Assn. apparel, footwear and accessories with sustainable attributes.

"It's 4ocean's mission to work with companies who share a similar mindset towards the ocean plastic pollution crisis and to work together cleaning the world's waterways and coastlines," said Alex Schulze, founder of 4ocean. "Through this partnership, I'm stoked to say that U.S. Polo Assn. has successfully met their goal of pulling 60,000 pounds of trash from the ocean."

Earlier this month, USPA Global Licensing Inc., the company that manages the multi-billion-dollar U.S. Polo Assn. brand, participated in a Beach Cleanup hosted by 4ocean in Riviera Beach, Florida. With the help of 20 volunteers and cleaning supplies provided by 4ocean, almost 40 pounds of trash were removed from one of South Florida's local beaches.

"I am proud to share that our meaningful partnership between U.S. Polo Assn. and 4ocean hit the huge milestone of 60,000 pounds just as we approached International Sustainability Day 2022," said J. Michael Prince, President and CEO of USPA Global Licensing Inc. "We want our consumers across 190 countries to know that U.S. Polo Assn.'s long-term sustainability journey includes activities around the world and here at home."

To learn more about the partnership, please visit uspoloassnglobal.com/4ocean.

4ocean is a purpose-driven business with a mission to help end the ocean plastic crisis by cleaning the ocean and coastlines while stopping the inflow of plastic. With the goal of creating an economy around cleaning the ocean, 4ocean has built a sustainable business model that allows the company to fund cleanups and utilize the latest innovative technology. Ocean cleanups are funded entirely through product purchases, removing one pound of trash for every item sold, for a total of over 25 million pounds to date. 4ocean prioritizes engaging coastal communities, which creates jobs and adds revenue to local economies while changing the demand from catching fish to catching plastic. The solution to ending ocean plastic pollution lies in stopping it on land before it enters the ocean, which is why 4ocean is educating consumers about ways to reduce their single-use plastic consumption.

U.S. Polo Assn. is the official brand of the United States Polo Association (USPA), the nonprofit governing body for the sport of polo in the United States and one of the oldest sports governing bodies, having been founded in 1890. With a multi-billion-dollar global footprint and worldwide distribution through some 1,200 U.S. Polo Assn. retail stores and thousands of department stores as well as sporting goods channels, independent retailers and e-commerce, U.S. Polo Assn. offers apparel for men, women, and children, as well as accessories and footwear in 190 countries worldwide. Today, U.S. Polo Assn. is ranked the 28th-largest licensor in the world and within the top five sports licensors, according to License Global's 2022 list of "Top Global Licensors." Visit uspoloassnglobal.com.