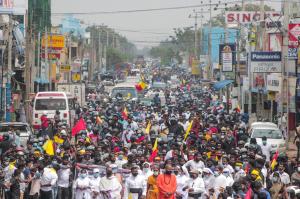 FGTO urges the international community to immediately support an interim governance structure for the Tamil homeland, Tamil Eelam, in the North-East of the island of Sri Lanka”

NEW YORK, USA, April 27, 2022 /EINPresswire.com/ — FGTO released a statement: “The Federation of Global Tamil Organizations (FGTO) urges the international community to immediately support an interim governance structure for the Tamil homeland, Tamil Eelam, in the North-East of the island of Sri Lanka, to provide humanitarian assistance to the Tamil people, who continue to face genocide under successive Sri Lankan governments.”

Sri Lanka’s current financial crisis is a result of decades of debt to sustain its genocidal war against the Tamil nation. This economic crisis has forced the Government of Sri Lanka (GoSL) into dialogue with a few Tamil parliamentarians – members of Tamil National Alliance (TNA). The establishment of a North-East Development Fund with investment from the Tamil diaspora was floated by a member of TNA. The FGTO requests that any such future discussions between the GoSL and Tamils should include all major Tamil national parties and Tamil civil society groups since the TNA is not the sole representative for the Tamil population in the North and East. Within the diaspora, it is key to note that the Global Tamil Forum (GTF) has no more than 1 of its 14 founding member organizations remaining in it and hence has for several years not been a true representative of the Tamil diaspora community.

“While the international community continues to delay and deny justice for mass atrocity crimes and acts of genocide committed by the Sri Lankan state it continues to silence and suppress Tamil diaspora voices through a criminal counter-terrorism lens by extending the listing of the Liberation Tigers of Tamil Eelam (LTTE) as a terrorist organization. This continuous listing, one that persists for over a decade since the end of the war in 2009, undermines and infringes upon the fundamental civil liberties of Tamils in diaspora communities. Delisting the LTTE as a terrorist organization is key to protecting Tamil civil liberties including the right to advocate for Eelam Tamils’ right to self-determination under international law”, FGTO further said.

The FGTO believes an international tribunal or referral to the ICC or ICJ is vital to independently investigate the genocide of Tamils committed by the Sri Lankan state, including the involvement of the Rajapaksas. The FGTO further calls for an internationally monitored referendum that will recognize the Tamil people’s sovereignty and independence.

The Eelam Tamil diaspora is estimated to be more than one-million strong, including a significant number of victims and survivors of Sri Lanka’s genocide. The FGTO vehemently believes that until a permanent political solution for Tamil grievances is achieved, which assures the Tamil nation freedom, justice and sovereignty, the Tamil community should not engage in talks of investment with the GoSL. All major Tamil American Organisations have recently defined the parameters of the political solution in the “Declaration of Common Principles of Tamils”.